adding to the herd

I'd thought, back when we first started talking about adding a horse to the herd, that I'd get a proven endurance mount. An Arab or part-Arab with some miles and experience to share. I've dreamed of participating in endurance for years and have yet to complete a ride (though I crewed for Tevis one year, which was awesome!) because, for one reason and another, my mustangs proved less amenable to my ambitions than I'd hoped. I still think Brisa is an awesome little trail pony and I intend to do some LDs with her, but Ranger... Well, at some point I think I'm going to have to admit that either Ranger is never going to be a reliable trail horse and/or I'm never going to be the right rider for him. Gypsy is too old for competition (in my opinion - she might disagree) so my husband and I agreed that, if this is something I'm really going to do, I'm going to need another horse to do it.

After investing so much time, energy, heartache and hope into gentling and training my mustangs only to discover they aren't the endurance prospects I'd hoped for (and I don't regret anything - I truly don't), I told my husband I was tired of doing things the hard way. I told him I was ready for something easy.

I wanted an Arab, as I said above. I wanted a gelding, because I have two mares already and I know what a bad mare day looks like. I wanted something around 5 or 6 - old enough to be settled and sane, but young enough to be hungry for action. I had visions of a horse I could just saddle up and sit on. :P

But... we went to Wyoming and rode several hours a day, every day for a week. I talked to wranglers and trainers, real cowboys and a dressage queen. Talked to people from France who ride Grand Prix jumpers and a couple who also ride mustangs, and... I realized that I really, really, really love my scruffy wild rogues.

I love the challenge of getting a horse bred by nature to survive and guessing what s/he will grow into. There's no pedigree or parentage to fall back on - no way to gauge expectations. A wild horse is a study in evolution and individualism, herd dynamics and communication, curiosity and caution and contradictions. I love that mustangs come with a wealth of experience and instinct - they're canny and quick, observant and sensitive. They're smart and sturdy.

And they need homes.

So I told my husband maybe I needed to focus on mustangs and forget endurance. He said, "Why not do both? Just because your mustangs aren't meant for endurance careers doesn't mean you can't find one that is."

And then I started watching the internet adoptions. I found a gelding already started under saddle and I thought, "Hey! I can have a mustang AND an easy project! I don't have to start from the beginning!"

And the whole time, I kept looking at this little filly. 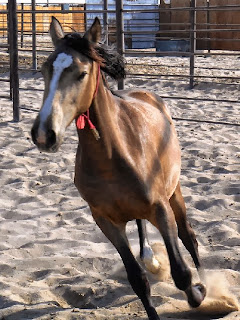 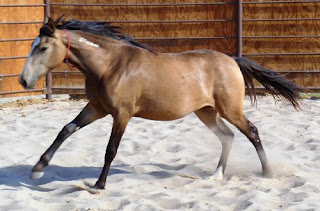 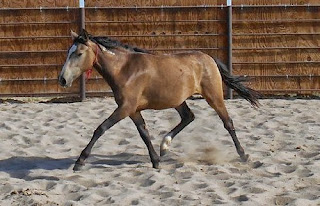 She wasn't what I wanted. At all. Only a yearling - too young to be fully developed, too young to know what sort of mind she'll have. Too young to start under saddle. And a filly rather than a gelding! And even though she looks buckskin now (I've always loved buckskins!), I suspect she's really a grey just beginning to fade out. I've never really wanted a grey...

I waited to see if anyone else would bid on her, but no one did. And then I found out she'd been relinquished at an earlier adoption with a high bid well over what I could afford, and it just didn't seem fair to send her back to the pens with another strike against her, so...

I pick her up Wednesday, and I am sick to my stomach with anxious butterflies. It's been a long time since I last gentled a wild one. Will I remember what my other mustangs have taught me? Will we click, or clash? Will she be willing and eager and friendly, or fiercely resistant and hard to tame? Will she learn to be bold and confident on the trail, or will she worry herself into ulcers every time the routine changes at all? Will she be sound and healthy?

I know I took a risk, choosing a horse I know NOTHING about. It's a gamble, and I have no idea if I've done something smart or incredibly stupid.

At this point, all I know is that one little wild horse has the chance to leave the BLM corrals and join my herd, where she'll have access to grass and hay and water, dozens of acres to roam, gentle training, and endless love and appreciation.

I hope it's enough.

I guess I'm not done doing things the hard way, after all.